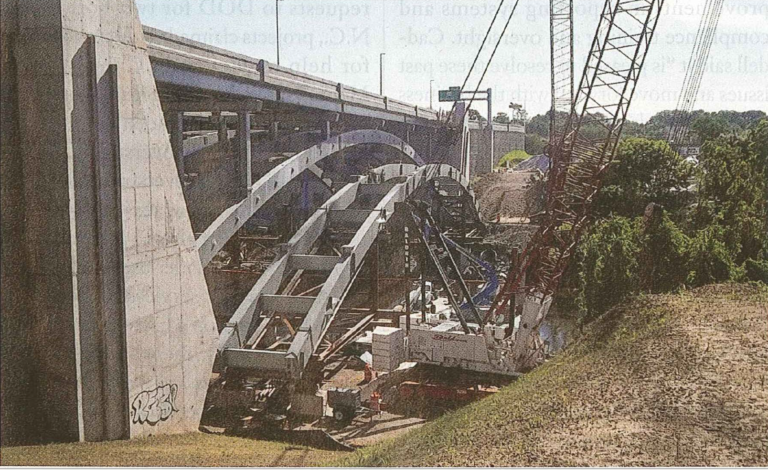 ROLLING ALONG New steel arches for a new Pawtucket River Bridge were rolled and jacked into place in a scheme devised to shave time off a project delayed by difficult access conditions and other issues.

An $81-million steel arch bridge project, now in its third year and third phase, has featured both high­ fives and hand-wringing in Rhode Island. Completion of a new 352-ft-long open spandrel Pawtucket River Bridge, with three structures, is now slated for August rather than June. Innovative methods helped make up for time lost-to access constraints and other hurdles for a joint venture of S&R Corp. and Pihl Inc.

Constructing three new structures for the new I-95 crossing while managing traffic flow and truck detours for the old crossing that carries 185,000 cars daily has been the greatest challenge, says Frank Corrao, chief engineer at the Rhode Is­land Dept. of Transportation. “All trucks had to take the bypass from north 2 9 5 or get off the ramps just before the bridges to travel city streets,” he says. Three lanes in each direction were maintained throughout the entire project.

After completing the first new struc­ture last spring in Phase 1, the joint ven­ture decided to utilized an innovative arch roll-in method, designed by McNary, Bergeron & Associates, for the second and third structures. “Our [original] plan to use cranes would have prohibited us from working on mechanical stabilized earth­ walls concurrently, so [joint venture per­sonnel developed a slider system,” says Frank Salmon, JV project manager.

Jim Bergeron, principal engineer with McNary, Bergeron & Associates, says it took three months to design the second span’s arch roll using 3 D software. Preas­sembly, sliding of the arch and jacking took place last fall in Phase 2. “Since an old highway runs between the new and the old bridges,· access was difficult, so crews built a staging area south of the new Phase 1 structure, then built arches on a temporary sliding system,” Bergeron says.

After the old I-95 northbound struc­ture was demolished, crews slid the new arches about 200 ft north on a rail system directly under the active roadway, then jacked the arches into place and onto bearings using 150-lb hollow-core hydraulic jacks and high-strength threaded bars. “There was a lot of hand-wringing,” Bergeron recalls. “We knew building this way would save time, but it was tough to convince the bridge owner and some of our own people that this could be done,” he says. “When lifting 400 tons, people tend to get a little tense.” But after the successful Phase 2 slide, “it was a major accomplishment to lift the 18-ton posting so truck traffic can utilize I-9 5,” following five years of detouring.

The third structure rolled into place this month. In the rest of Phase 3, the old I-95 south structure will be demolished and rebuilt before opening the first struc­ture as a collector/ distributor road to accommodate traffic to and from local streets. Crews will build two sets of me­dian barriers following completion of the new southbound structure.
The overall four-month delay led to mediation, which RIDOT says success­fully led to the new August completion date. The JV would face $45,000 per day for incentive/disincentive and $12,500 for liquidated damages, Corrao says.

Some of the ·delays arose from a differ­ence in expectations based on a set of plan design dimensions, Corrao says. One de­lay of about six weeks occurred from mis­alignment of two spandrel columns due to an apparent fabrication problem. “We took two.stringers off, plumbed up the spandrels with beveled shim plates and corrected the plumbness in the spandrels, prior to opening the first phase bridge,” Salmon says. There was also an issue with a deflection of the spandrel columns, which caused an additional delay.

The general contractor has also suc­cessfully contested two citations issued by the Occupational Safety and Health Ad­ministration last June for a total of $60,900 for inadequate rescue and fall safeguards. The contractor says one fine was thrown out, and OSHA has proposed reducing the other to $6,000.