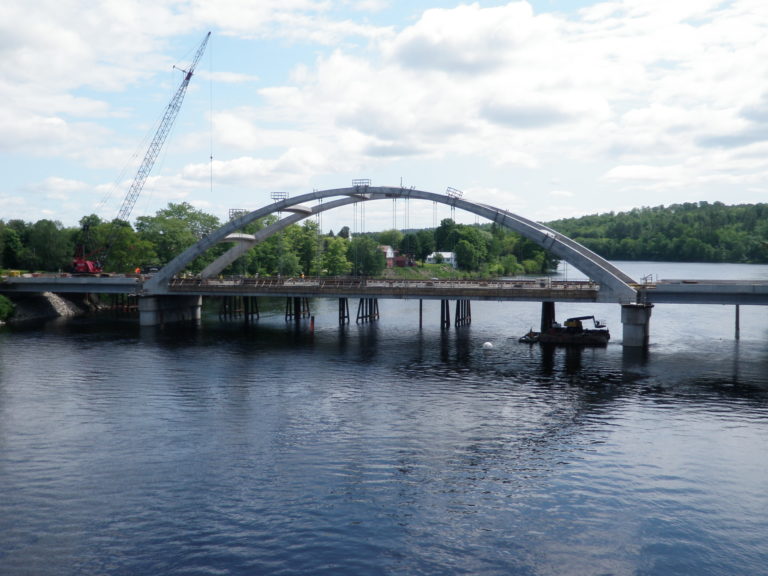 The emotional send-off was all one needed to see to fully understand the deep connection between a town and its 80-year-old bridge.

On Sept. 20, Norridgewock, Maine—a town of roughly 3,300 people located along a bend in the Kennebec River, some 90 miles northwest of Portland—bid farewell to the Norridgewock Bridge. In an event dubbed “The Last Walk Across the Bridge,” a parade of locals strolled across the concrete structure: everyone from bagpipers and folks driving antique automobiles to student musicians and veterans.

For the townspeople, the Norridgewock Bridge was more than just a transportation link. Honored as one of Maine’s most significant 20th-century bridges by the Maine Historic Preservation Commission, the bridge was a landmark, a vital part of the community’s identity and an essential part of the town’s brand. So much so that renderings of the bridge can be found on the town’s logo and letterhead. So when state and local officials began the process of deciding whether to rehabilitate the current structure or construct a new bridge, one thing remained clear: This project would not only be about finding engineering solutions but about community ones as well.

The Norridgewock Bridge was constructed in 1929. It replaced an 80-year-old, 600-ft covered bridge that ranked as the second longest of its kind in Maine (after the 792-ft Bangor Covered Bridge). According to newspaper reports, various other bridges existed on the same spot previously, with many falling victim to the annual spring “freshets”—when ice builds up in the Kennebec River and then breaks with a burst of floodwater.

However, the Norridgewock Bridge would not be a victim of the annual floodwaters, but merely time. During the aforementioned “Last Walk Across the Bridge” event, many townspeople—frequent travelers of the structure by vehicle—walked the bridge on foot for the first time and expressed surprise at how much the notable landmark was deteriorating. The concrete was crumbling in spots, particularly on the bridge’s pedestrian walkway, leaving the steel inside to be exposed. The bridge’s pier cap had suffered damage. And several of the bridge’s cross members were in rough shape, because many of the roughly 11,000 vehicles that traverse the bridge each day are paper and log trucks and are simply too large for suitable clearance.

Early in the planning stages the big question became: Should we build a new structure or preserve the current one? There were several major factors that contributed to the decision to construct a new bridge, including the determination that the 80-year-old structure was functionally obsolete and thus unable to handle increasing traffic loads and concerns about its life cycle (would there be a need to rehabilitate again a few years down the road?). Despite the amount of sentiment attached to the 80-year-old bridge, the town came to realize it was time to construct a new one.

A number of groups and individuals were involved with the planning process: S E A Consultants of Augusta, Maine, who would design the new structure; the Norridgewock town manager; various appointed individuals from the community; the Maine Department of Transportation; and the Maine Historic Preservation Commission. Members of the 10-person planning committee recognized the historic nature of the bridge and understood that replacing it with another landmark structure was crucial. Meetings were held every few months, at which renderings and photographs were frequently presented. And in one of the more unusual aspects of the planning process, local residents were invited to attend and freely offer suggestions.

Ultimately, the final design strongly reflected the community’s input to properly mitigate the loss of the bridge by incorporating key aspects of the old structure and creating a “modern” historic bridge. The primary element retained was the older bridge’s arch design. The original 1928 structure had four concrete tied-arch spans. The new bridge will retain the tied arch, but transforms it into a 300-ft arch that will stand 60 ft high. When completed, the new Norridgewock Bridge will be only the second modern concrete tied arch bridge in the U.S. (The Depot Street Bridge in Oregon is the other.)

The arch also is part of what makes this bridge a rather unconventional structure from a design standpoint. With conventional arch bridges, the arch is anchored onto bedrock at either end. With the new Norridgewock Bridge, the arch rests on piers in the river rather than bedrock, with the arch thrust supported by a tie underneath the roadway.

The tie is a cast-in-place member that will be post-tensioned in stages as additional load from other structural components is added. The bridge was designed by using a powerful software package called Larsa 4D that looks at time-dependent effects such as creep and shrinkage. The computer model was built in the same stages that will be used to construct the bridge, so that the designer could visualize the effect on the other members of adding a new member during construction.

Other features of the new bridge include two 135-ft approach spans on either end of the main 300-ft span. (The old bridge consisted of eight spans, with four arch and four conventional spans.) There also were a number of innovative elements worked into the design:

The elimination of deck joints: Most bridges consisting of two different span types include deck joints between the spans. The new bridge’s design called for the elimination of these joints, thus eliminating a path for water and salt to flow onto the bearings and reducing the need for maintenance;
Elastomeric bridge bearings: By utilizing these more durable and elastic bearings, less maintenance will be required than for bearings or large rocker bearings;
Precast concrete: Unlike the Depot Street Bridge in Oregon, which was cast entirely in place, the new Norridgewock Bridge will utilize precast deck panels and floor beams to speed construction. This was done at the urging of the Maine Department of Transportation; and
Replaceable hangers: The new bridge’s steel-cable hangers can easily be removed and replaced when needed.
Incidentally, the bridge’s hangers are the only parts of the new structure that will not be concrete. The community and Maine Historic Preservation Commission, among others, stressed the importance of constructing another concrete bridge. Doing so added historical context to the new structure, keeping with the design elements and overall aesthetic of the original.

The new bridge will feature 25 ft of overhead clearance (as opposed to 14 ft on the old structure), so that proper clearance will no longer be an issue for the myriad large trucks common to the area. And there will be 41 ft of roadway width, more than double the prior width for vehicles.

The old bridge featured two pedestrian sidewalks, each located outside its four arches. The new bridge will feature a 5-ft sidewalk, as well as a 7-ft-wide multiuse lane. Both will be located within the arch. The multiuse lane will be wide enough for horseback riders, bicycles—even snowmobiles, since the bridge lies along the Interconnected Trail System, a series of trails throughout Maine open to snowmobilers. The lane will not be plowed in the winter, a rare feature that has been implemented in only a handful of other bridges in Maine.

The first major phase of the Norridgewock Bridge project involved constructing a temporary span across the Kennebec River. That opened to traffic in December. Then the original 1928 bridge will be taken down with that phase expected to be completed by February 2009. Two cofferdams, one for each pier being constructed, will be installed beginning in January.

One of the major challenges for the contractors comes from the river itself, since the Kennebec is known for its particularly thick ice. The project calls for erecting the bridge’s arch span in one construction season, so the contractors will have to contend with the ice for only one winter season. The entire bridge project is expected to be completed by fall 2011 at a construction cost of $21 million.

By implementing the classic design of the original structure, the new Norridgewock Bridge will replicate the sophistication and beauty of its predecessor. An efficient working relationship between S E A Consultants, transportation officials, historic preservationists and the community itself helped produce what will surely be a new treasured landmark in the town of Norridgewock.

“The citizens of Norridgewock and the surrounding area hate to see the old bridge go,” said Gloria Frederick, a Norridgewock resident who chaired the “Last Walk Across the Bridge” committee. “But they know the time has come for it to be replaced. We must now move into the future. And with all the great work everyone has done, from the architects to people in the community, the transition seems to be so much easier.

Built to Resist the Big One