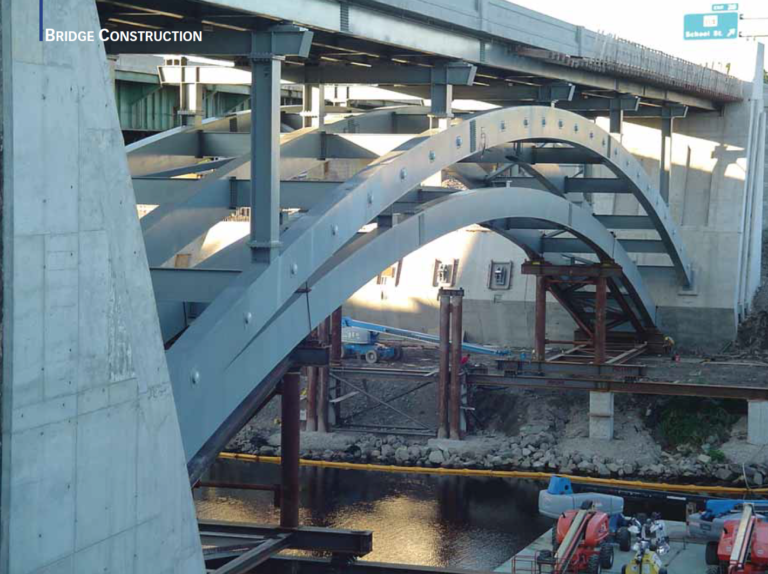 Construction of the $81 million New Pawtucket River Bridge is complete and on time largely due to innovative means and methods implemented at the 11th hour.

Four months behind schedule with a project completion date less than one year away, the joint venture (JV) of S&R Corp. and Pihl Inc. adapted, accelerated and opened the replacement bridge as planned, eliminating the bane of travel through Rhode Island for the previous 51 1/2 years. In November 2007, in the aftermath of the I-35W bridge collapse in Minnesota, the 52-year-old Pawtucket River Bridge, which carries I-95 just north of Providence, R.I., was declared structurally deficient due to excessive deterioration. The five-span, twingirder bridge with a suspended 225-ft main span (pin and hanger) had suffered extensive corrosion to the floor beams, as well as significant section loss of the main girders and stringers. The state of Rhode Island was forced to make an unpopular decision: impose a weight restriction that banned vehicles with more than two axles and weight over 18 tons. Now, anyone who has ever traveled the Eastern Seaboard understands the significance of I-95 and can imagine the havoc created by bannning the truck traffic it supports. And, to show they were serious, the state police imposed a fine of $3,000 on any truckers violating the ban. State police were regularly posted at either end of the bridge to enforce the restriction. Many trucks exited locally just before the bridge through residential areas, clogging the streets of Pawtucket, but many just took their chances and continued to cross the bridge despite the fines. It has been reported that as of 2011, Rhode Island had collected over $7 million in fines. Not until the first phase of construction of the New Pawtucket River Bridge was completed in April 2012 did the weight restrictions begin to ease. Needless to say, construction of the new I-95 crossing received a lot of attention.

The design of the New Pawtucket River Bridge—a steel open-spandrel deck arch spanning 352 ft built in the footprint of the existing bridge—answered demands from local groups for a signature crossing of the Seekonk River in downtown Pawtucket. The new bridge, designed by local engineering firm Commonwealth Engineers of Provi-dence, added approximately 42 ft of overall bridge width to accommodate the addition of a collector-distributor road to accommodate traffic to and from local streets adjacent to the northbound structure. The additional width provided for on-line construction of the three bridges in three phases with mini-mal disruption to traffic. Phase 1 consisted of adding the new C-D bridge to the south of existing I-95 northbound and switching northbound traffic onto the new bridge. Phases 2 and 3 involved the demolition of the existing bridge and reconstructing new bridge structures in the respective alignments of the existing northbound and southbound structures. The three parallel structures (C-D, I-95 NB and I-95 SB) are independent at deck level, separated by barrier and an open joint, but share a massive abutment founded on bedrock on either side of the river. This, too, had to be constructed in phases, requiring major excavation support structures. Building a new bridge in this manner meant the construction schedule was largely linear. With incentives/disincentives of $45,000 a day, and another $12,500 liqui-dated damages assessed every day the bridge was not opened on time, the project was ripe for innovative ideas.

The three-bridge-structure system consists of 11 steel box arch ribs spaced laterally at 14 ft, spandrel columns spaced at 60 ft along the length of the arch ribs, steel stringers that sit atop the spandrel column cap beams and a precast, post-tensioned deck. The first phase, C-D road, which consisted of three of the 11 arch ribs, was erected conventionally using 300-ton-class cranes staged at either side of the Seekonk River just downstream of the existing bridge. Arch ribs comprise three field sections weighing as much as 60 tons. End sections were each set on temporary supports, and the keystone drop-in section was staged on the river, lifted off barges in tandem and spliced in to complete the rib line. The arch upper works (spandrels, cap beams, stringers and deck panels) consisted of light picks and could be erected relatively easily from numerous staging areas for all three phases. The 60-ton arch-rib sections were another story. Access to build the first phase was relatively good, but erection of the arch ribs for Phase 2 was what some contractors refer to as a “practical impossibility.” They could not be lifted over the active I-95 NB traffic into position; it was just too far. And mainline traffic closures would be long and numerous. Lifting from underneath with cranes was not possible, as booms would quickly become bound between the NB and SB structures. The only possible way to erect the arches some-what conventionally was from either end of the bridge at the approaches.

The JV’s initial plan was to stage massive 300-ton cranes on ringer supports behind the new abutments in the 50-ft-wide slot that I-95 NB occupied. The crane would just fit between NB and SB traffic and would require closures of I-95 when swinging picks at a 150-ft radius into position. The schedule for construction in this manner did not allow much room for concurrent activities. It meant the demolition of existing I-95 NB, which was accomplished progressively from above with light truck cranes, then completion of the abutments to grade, prior to being able to begin mobilization of the cranes in the position to erect the arches. This plan was terribly inefficient, but it was a familiar, conventional method that would work. McNary Bergeron & Associates was selected by the JV to provide the construction engineering support for erection and demolition of the structures and worked closely with the JV to vet all kinds of ideas to optimize Phase 2 construction. In the end, the team settled on a “roll-in” scheme for the arches. By preassembling the arches off-line and erecting the Phase 2 structure in the I-95 NB slot from below, months of schedule savings could be had. The arches could be erected long before the upper portions of the abutments and approach work were complete for the phase. It was not without some reservation, however. The method to erect the final Phase 3 structure (I-93 SB) would not be selected until the roll-in method was in fact proven successful.

A three-month effort of construction engineering ensued to develop, design and receive owner approval for the roll-in scheme. Here’s how it broke down: Erect the Phase 2 arch ribs on a temporary support structure in a staging area downstream of the newly erected Phase 1 structure, where crane access was reasonably good; slide the temporary support structure along a track with the completed arch ribs to the north, passing under the newly erected Phase 1 structure, directly below their final position; lifting bars suspended from jacking towers would be engaged at the base of the frames to support the arch and the arch ribs lifted approximately 12 ft vertically into their final position on the arch pin bearings. The Phase 2 and 3 structures each contain four arch ribs. To simplify the system, arch ribs were to be erected in pairs, complete with the permanent bracing between the two. The light bracing members between the adjacent arch rib pairs and the upper works to the arches (spandrels, cap beams, stringers and deck panels) would be erected from above from adjacent structures using light truck cranes in partial lane closures.

Erection of the temporary infrastructure for the roll-in scheme, which was an investment of approximately $800,000 in temporary works and equipment, started immediately, long before demolition of the Phase 2 structure was started. A steel beam track was set on either side of the river, founded on temporary concrete columns set on bedrock. Slide frames, which also provided the temporary support to assemble the structure in the staging area, were each set on a system of 4- to 50-ton-capacity rollers. Erection of the Phase 2 arches then began, concurrently with the respective demolition operations, months ahead of schedule. As soon as the existing structure was completely demolished and cleared, arches were launched to the north over the course of a few hours, ready for vertical lifting into position.

Lifting the arches up 12 ft onto the arch pins had its fair share of engineering and construction challenges as well. Thrust at the bearings due to dead load of the arch ribs alone was approximately 450 kips per bear-ing. The temporary support of the arch as it was lifted needed to be configured in such a way that a no-load condition at the bearings was effectively created as it was erected. By supporting the arch like a beam, it would deflect (or hunch up) and the overall horizontal distance from end to end of the arch could be made a little shorter than its length in its final position. As the arch was set into place on the bearings, by incrementally lowering the temporary supports, the ends of the arch caught the arch pin, and load was transferred into the permanent bearings. But, the arch pin bearings had to be retracted to allow the arch to pass during the vertical lift, and projected forward into theoretical position. So, there was a day or two that the arch was suspended up in place while crews jacked the bearing seats with the arch pins into position and concreted the bearing plinths behind.

As soon as concrete reached strength, the arch was lowered onto the bearings, and the slide frames were removed and relocated for the next pair of arch ribs.

Lifting 400 tons of arches up off the tracks using eight 13⁄4-in.-high strength bars and 200-ton-capacity center hole jacks needed to be carefully coordinated. Each of the four jacking stations was manned with two iron-workers who communicated measurements and the start and stop of each 10-in. stroke of the jack.

A couple of hurdles on the way up also complicated the operation. The front face of the abutments was sloped inward, and the lower corners would conflict with the arch as it passed by about 6 in. Precut slots in the face of the abutment were made, but could only be deep enough to allow 1⁄2 in. of clearance for the arch to pass without damaging primary reinforcement. Once this was cleared about half way into the jacking operation, the last test was the bearings. The arches had to be within about 1⁄8 in. of plan for the upper and lower half of the bearing seats to clear each other. A lateral adjustment system at each of the jacking stations allowed the location of the lift to be dialed in as needed. Every precaution was taken during planning to ensure the operation was successful.

The first time through the rolling/lifting operation in June 2012 drew a tremendous amount of interest: The stakes were high for everyone involved. It was no secret what it meant to the project if the roll-in scheme worked. And while that first time through the operation started with quite a bit of hand wringing and intensity, it ended with smiles and hand shakes. It went exactly according to plan.

The decision was made quickly to roll in the last phase of arches using the same system, from the same staging area. It was just a matter of extending the track to the north and rolling the arches a little farther.